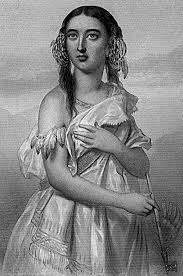 I started writing this a year ago, and I had hoped I wouldn’t need to post it, but here we are with a seemingly decent public figure digging her own political grave in a desperate, nail-ripping grasp of identity.

Elizabeth Warren was brought up on a story both romantic and empowering. Told that one of her ancestors was ostracized because of her Native American heritage, and was loved and married despite that (wholly unacceptable!) racism, Warren wove the story into her own identity from the time she was a little girl. And who wouldn’t? Hell, I cling to my genetic half-Judaism like it’s the last lifeboat on the sinking ship of white supremacy. What thoughtful, educated, observant white person would want to be White? I mean, we want all our stuff and political and economic supremacy of course, but we also want to claim some history of oppression, some feeling of done-wrongedness that will act as a palliative to our privilege. Maybe we can balance out a little of our imperialist, murderous, slaveowning genes with a sprinkling of the “good guys.” Maybe we can find some African genes in our 23 and Me results (nope, just more Mongolian: Khan slut). But for many the ultimate prize is Native affiliation, especially in the US.

I went through a big Indian phase – read tons of Native books (mostly novels), bought Native jewelry and knicknacks, spent a lot of time traveling Navajo/Dine country in the Southwest. Because Indians are fucking cool, man. We simultaneously embrace these conflicting concepts of Native people in the US: the drunken, uneducated, poverty-stricken people living on pitiable reservations; and the wise, equanimous souls who understand silence and the universe and our relationship with the natural world. They have potions and spirit animals and songs and dances and secrets and wisdom. Who wouldn’t want a piece of that?

So a white woman clings to that family story, as do her relatives, reinforcing it across generations. But when it comes down to it, it’s just a story. One that she repeats and uses officially and unofficially for decades.

I can believe that she wasn’t looking for affirmative action or special treatment because of it, I really can. But she wanted something. Was it just a little less guilt? A little less complicity? A little more grooviness, man? Whatever it was was her own business, her psychological drama to bear, until Trump got hold of it. Then it became our problem.

Because Warren has taken a leadership role in Congress. She has stood up for the little guy, the disenfranchised, the poor, and stood up to the archetypal “white man.” Despite the inability to sound human and genuine when she makes a speech (an affliction that seems to infect nearly every living politician, usually forever; somebody get these people an acting coach!), she had potential. And I’m not writing her political death warrant, but she has wasted much of that work because of some bullshit concept of her racial identity.

As soon as her Native claims were brought into the light of day, she should have had the sense to come out and say, “look, this is a story my family was brought up on, and I’ve had a hard time letting go of it, because the Native peoples in this country are so special, I have so much respect for them, and I so wanted to be identified with them. But I have no tribal affiliation and no way to prove this claim, so I am letting it go, out of respect to the people who have suffered the injustices of being Native in the US. I have lived my life as a white woman, with all the privilege (and the prejudice) that goes with that. I will fight for native rights and sovereignty, and against the insults liberally tossed around by the President, as every red-blooded American should, because “Indians” are the true Americans, and all the rest of us are immigrants.

Then she could just ignore all that Pocahontas shit, with the Indian nations possibly supporting her. Instead, she waited way too long and then tried to reify her fable by taking a DNA test, pissing off the recognized tribes and making herself a joke.

Part of me doesn’t blame her, because I know how hard it is to let go of labels you wear like military honors, or college sweatshirts, but Identity has so much destructive power, from sports fans that can’t let go of a racist mascot to men that can’t let go of abusive machismo. Yes, markers can be empowering or helpful or politically necessary, but if we can’t let go of them when they cause harm to ourselves and others, what good are they? To me, the greatest identity crisis is not trying to figure out who you are, but blindly accepting some inculcated idea of who you are without questioning it. Unfortunately,  most of us never get past that phase.